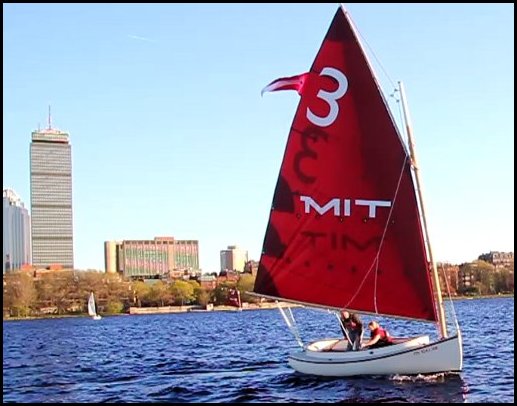 The MIT Sailing Pavilion has a new fleet of six 16-foot gaff-rigged boats built by Arey's Pond Boat Yard. The Lynx is a traditional Cape Cod catboat, with one mast at the front of the boat and one gaff rigged sail, meaning the sail is four-sided. The style is traditional for workboats off Cape Cod, Martha's Vineyard and Nantucket. Other catboats at MIT include the Tech Dinghy and the Laser, but the Lynx is the only one with a gaff rig. It is a great party boat because it holds six to eight people, is relatively stable, and has a distinctive style. This document describes how to rig and sail the Lynx as well as how to take it on trips to Boston Harbor.

Because of its distinctive rig, the Lynx is a very recognizable boat. As such, sailors should consider themselves ambassadors for MIT and practice good seamanship, following the rules for right-of-way with sailboats, motor boats, and human-powered vessels.

The aim of this page is to give detailed information on every aspect of the Lynx. Lynx_16_Cheat_Sheet is a one page summary with just the essentials. Track repair, maintenance, and purchase items at Lynx_maintenance.

When sailing in the Charles River Basin, all the Pavilion rules apply in terms of areas allowed to sail and recall signals. The Lynx's draft is shallow: 4'6" feet with the centerboard down, and 14" with the centerboard up, but it's still bad idea to run aground in Boston!

It's a good idea to keep some general guidelines in mind when sailing the Lynx. First, keep the lanes clear. Stow all backpacks and gear under the bench, so that crew can quickly move from the back to the front of the boat. Second, make sure the mainsheet and halyards are always running free; never tie them to themselves or stow them in a way that cannot be quickly released. (But never untie the stopper knots in these lines!) Be aware that the mainsheet sometimes gets caught on the traveler when tacking or gybing.

The Lynx is a gaff-rigged boat, unlike MIT's other boats. A gaff-rigged boat has a second spar called the gaff, which lies parallel to the boom when the sail is down, and rises at an angle above the mast when the sail is up. This rig increases the size of the sail area the mast and boom can carry, with less heeling than a triangular sail, although it cannot sail as close to the wind.

To raise the sail, first note that the Lynx has not one, but two halyards, one to raise each end of the gaff. The end of the gaff closest to the mast is called the throat; the end farthest from the mast is called the peak. The corresponding halyards are called the throat halyard and the peak halyard. To raise the mainsail, pull both halyards up at about the same rate. Pull the throat halyard tight as high as it will go. Then raise the peak halyard until the sail is smooth. If the peak is too loose, there will be horizontal wrinkles in the sail; too tight, and the sail will have vertical wrinkles. Adjust it so that there is just a hint of a vertical wrinkle, as the lines will stretch once underway. Coil the halyards, laying the coils in opposite directions. Do not finish by tying the halyard to itself, as that might make it difficult to quickly lower the sail in an emergency. Instead, reach through the coil and pick up the line where it comes off the cam cleat, pull the loop back through the coil, and loop it over the horn cleat. Then if the halyard needs to be lowered in a hurry, it can be lifted off the cleat, dropped on the deck, and it is ready to go.

Make sure the lanes are clear in the boat: the fender should be wedged under the seat, and backpacks should be pushed under the benches. Then the crew can quickly reach the front of the boat in order to lower the sails or open the dry storage space.

When leaving the dock, pull the sail in to power up the boat and push the tiller towards the dock. It will probably be necessary to give the boat a large push to get it onto the correct tack. Make sure the centerboard is all the way down to make it turn as quickly as possible. Once the boat is away from the dock, stow the fender under the bench. Wedge it in place so it will not move while under way.

When casting off from a mooring, make sure the mooring is attached to the bow cleat closest to the wall. Switch cleats if necessary. Pull the sail all the way in and push the tiller towards the wall. The boat will power up and tack away from the wall. Once the boat is on the correct tack so that it is heading away from the wall, one person should release the boat from the mooring and walk back along the wall side of the boat. This action will help the boat turn on the correct tack to sail away from the wall. The more experienced person should do this job (the skipper if necessary); anyone can push the tiller towards the wall, while the person handling the mooring line can make or break the launch.

Do not drop the mooring line until the boat is powered up and sailing away from the wall. If necessary, more people can help hold the line and get it back on the cleat for another try.

When tacking in the Lynx, pull in the sail and start to turn the boat. The boat does not head upwind well, so do not pull in the sail too far. Make sure the centerboard is all the way down. Do not push the tiller all the way over, or the boat will slow down and may get stuck in irons. Instead, push it about three quarters of the way over so that the boat makes a gradual turn. (Of course, turning too slowly may also result in being stuck in irons.)

To gybe, get on a broad reach. Alert the crew to prepare to gybe, and pull the sail in about half way. Begin the turn; as the boat turns, the crew should continue pulling in the sail. Warn the crew as the sail comes around. Once the sail moves, let it back out and trim it properly for the new course. If the sail is pulled in too soon before the turn, or not let out quickly enough after the turn, the boat will develop strong weather helm and try to turn into the wind. Because the sail is so big, it is dangerous to do an uncontrolled gybe. Always pull in the sail and let it back out as the boat turns.

Sometimes the centerboard gets stuck. Often it can be eased up and back down or dropped quickly to get it unstuck. Sometimes it helps to tack to take the pressure off the board.

If the wind is 12-15 knots, use the first reef. If it's 18 knots or higher, use the second. Reefing should be done on the dock rather than out in the river, although when out in the harbor it may be necessary to do it at sea. There are reefing clips at two locations at the end of the boom, and a reefing hook where the boom meets the mast. The sail has rings (reefing tacks and reefing clews) at the corresponding locations on the sail.

To reef the sail, lower both halyards. Have someone stand on the bow and lift up the lowest white ring as far up the mast as it will go. Someone else can hold up the end of the boom, to help the person putting in the reef. To put in the reef, first hook the clips into the reefing clew (at the end of the boom). The two clips go into the corresponding rings on each side of the sail. Make sure the strap connecting the two clips is not twisted, as every millimeter is necessary to put in the reef. Put in the first clip first and then stretch the sail and the clips until the second one is in. Once both clips are in, attach the reefing hook to the reefing tack where the boom and the mast meet. Make sure that corresponding reef points are used: do not try to use the second reef on the tack and the first reef on the clew.

Make sure the centerboard is fully down so the boat will turn sharply. Let the sail out to slow the boat down, and make a sharp turn about a boat-length away from the dock. Sharp turns slow the boat down. Have a crew member ready with the bow line to step out of the boat, pass the bow line through one of the loops on the edge of the dock and then bring the line back to the boat and cleat the line on the bow cleat nearest the dock. Don't forget to make sure that the bow line is passing through the chock.

Putting Away the Boat

To put away the boat, get out the boom crutch and install it in the stern. Take out any reefs that have been put in. Lower both halyards; the red peak halyard will have to be lowered faster than the throat halyard. The white lazy jack lines will cradle the sail, causing it to fall along the boom. When the sail and boom are all the way down, rest the boom in the crutch. Then put the sail cover on the sail, starting from the end of the boom. Put the sail cover around the front of the mast but inside the two halyard lines. Tighten and coil the mainsheet and rest it on top of the tiller. Do not tie the mainsheet to itself - just coil it and drape it on the tiller. Put the tiller tamers on the tiller. Raise the centerboard.

The Lynx is self-bailing, with two drainage holes near the centerboard. However, if significant water gets in the boat, pumps may be located in the dry storage area in the bow. This area also has an anchor and flares for emergencies. The boat has running lights; the switch is located in the stern next to the tiller (but only works if you brought the battery).

Unexpected events happen while sailing. If the wind picks up suddenly and the boat is overpowered, head to wind, and let the sail out. Then sail back to the dock and reef. If it's really crazy, lower the peak halyard all the way to reduce the sail area ("scantelizing the peak").

What if the forestay breaks? Head downwind to take pressure off the stay, and then lower the sail.

What about if the mainsheet gets lost? Try to retrieve it by reaching along the boom. If the boat is heading downwind, lower the centerboard all the way and turn the tiller all the way to one side to turn the boat into the wind. This action will bring the boom back over the boat. (Avoid this problem in the first place by never untying the stopper knots in the mainsheet!)

What if the boat is stuck in irons close to the wall? Warn the crew to fend off. Have them get out the paddle and put out the fender. Land facing upwind. Try to cast off by pulling in the sail and pushing the boat onto the correct tack with the oar.

Outline for the Class

This is the outline used for teaching the Lynx class.